A Brief History of the Bagpipe (with much left out...) 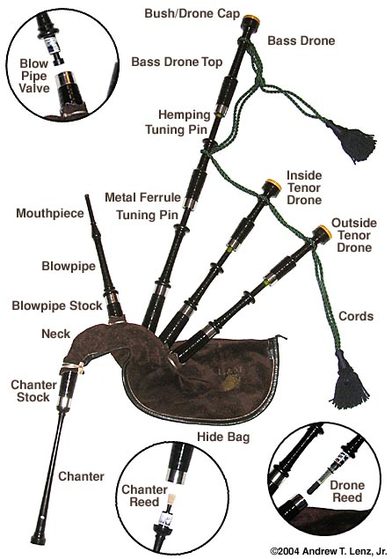 Russell plays a set of Gibson pipes, manufactured in Eastlake, Ohio, by master pipemaker Jerry Gibson.  Like most Highland bagpipes today, they are fashioned out of a very dense and dark colored wood called African blackwood.  It is likely that the first bagpipes originated outside the Scottish highlands.  The earliest known pipes, whose reeds were made of barley straw, are found in Egypt.  Wherever the bagpipes found a maker, however, their design was similar: a chanter and one or more drones were lashed into some animal product, such as a hide or gut.

In the ancient Sumerian city of Ur, the grave of a piper was found to have more offerings than any other burial in the royal cemetery.  This is testament to the status given to a piper in that culture, more than 4,000 years ago.

Though the Scots have used the bagpipes to lead troops into battle for centuries, the ancient Greeks - specifically the Spartans - are the first recorded as marching into battle with bagpipes.  The Spartans were also the first to add a drum to their piping.  Greek historians, Thucydides and Plutarch, mention the importance of piping in unison so as not to break ranks while marching into battle.  A modern Greek bagpipe, the gaida, is still played.  Inspired by the Greeks, the Romans also had their pipes; although, they made theirs bigger and louder.  Pipes were used in religious ceremonies, as well as for entertainment.  Purportedly, Julius Caeasar had a vision of a piper calling him across the Rubicon.  Emporer Nero, an accomplished piper, once played the bagpipes while he watched Rome burn.  One of the names used for Roman bagpipes was utricularis, based on the Latin word uterus.

The instrument has a long and colorful history.  Different types of bagpipes are found scattered among many cultures in Europe and the Middle East.  Many of these different pipes fell into disuse during the 18th and 19th centuries.

While they are certainly not unique to the British Isles, the great Highland bagpipe of Scotland is certainly the most recognizable.  Though widely famous for its role in military and civilian pipe bands, the Great Highland Bagpipe is also used for a solo virtuosic style called piobaireachd.  Due to the constant airflow through the pipes and the constant drone sound, the Great Highland Bagpipe Chanter is played constantly.  Rather than breathing between notes or taking rests, the piper uses various gracenote "movements", such as taorluaths, leumluaths, doublings, and many others to embellish the tune and create a very unique sound.  There are four reeds in the instrument, traditionally all made of cane.  Today, pipers still play a cane chanter reed, but drone reeds are made from a variety of synthetic materials which help to create an equally rich sound with less of a temperamental reaction to changes in temperature and humidity.  The modern form of the Great Highland Bagpipe can be confirmed back to the 1500s and its history is colorful, full of stories of amazing piper sacrifices in WWI to being outlawed by the British, and even not being allowed to be played in some churches do their designation and history as an instrument of war.

If you are looking for something a bit quieter and better suited for smaller gatherings, ask me about my Scottish Smallpipes, hand-made in Pittsburgh, PA by Quietpiper Smallpipes.  They are perfect for smaller occassions!

The origin of the Scottish Smallpipes is a bit shrouded by the mystery of time. Perhaps going back to 1757 or even to the 15th century, the modern form of this bellows-blown Scottish Bagpipe came to be in the 1980s. Equipped with wooden reeds and typically hand-made in a variety of styles, woods, and settings, they are too quiet to be heard over a large crowd but are able to fill a room or a fireside very nicely.

My smallpipes were designed entirely from sustainable materials. With cherry bellows, apple drones made from wood gathered in a Pennsylvania orchard, they are as sustainable in materials as they are to listen to. There are four drones with a variety of possible configurations that allow quite a bit of versatility and two chanters, in A and D.
UA-39459799-1